ART OF ANAMORPHOSIS
What is Anamorphosis?

An unconventional way of seeing

An anamorphosis is a deformed image that appears in its true shape when viewed in some "unconventional" way. According to Webster's 1913 Dictionary:

A distorted or monstrous projection or representation of an image on a plane or curved surface, which, when viewed from a certain point, or as reflected from a curved mirror or through a polyhedron, appears regular and in proportion; a deformation of an image.

In one common form of anamorphosis---usually termed "oblique"--- the unconventionality arises from the fact that the image must be viewed from a position that is very far from the usual in-front and straight-ahead position from which we normally expect images to be looked at.

In another common form---sometimes termed "catoptric"---the image must be seen reflected in a distorting mirror (typical shapes being cylindrical, conical and pyramidal). The Hungarian artist István Orosz has produced some beautiful examples of these.

You can download from this web site a piece of software called Anamorph Me! which will allow you to create your own oblique and catoptric anamorphoses.

A particularly well-known example of oblique anamorphosis is contained in the painting known as The Ambassadors in the National Gallery in London. 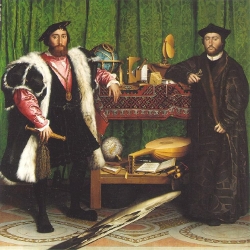 In the lower half of this picture there is an oblong shape, which, with a little inspection, you should be able to make out as the distorted image of a human skull. (The symbolism of this has been much debated; see, for example, the National Gallery book Holbein's Ambassadors-Making and Meaning, 1998.)

The skull achieves its true shape if you view it from the right hand side and very close to the plane of the painting. To view it on a computer screen, close your left eye, and put your right eye next to the screen, about half way up the painting and about 5-10 cm. to the right of it. From this unconventional viewpoint, you will see something like [THIS].

The uses of anamorphosis

By far the most common use of "anamorphic" designs (of an approximate kind) is in road markings. The problem is that the markings have to be viewed by road users from an "unconventional" position - at a shallow angle - where the effect of foreshortening (that is, the apparent shrinking of objects as they move further away) is to significantly squash the vertical dimension. Here's a typical example: 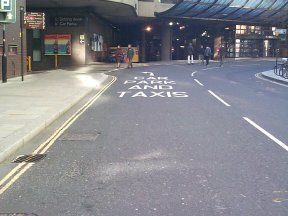 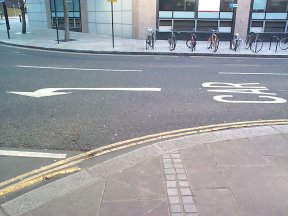 Viewed from a distance, the height of the arrow looks the same as the height of the word CAR below it. Viewed from the side, we can see that the arrow is actually more than twice as high as the word. (Conversely, of course, if the arrow were only the same height as the word then it would appear half as high.) Note: Road markings are usually based on stretching and are therefore not strictly-speaking anamorphic - oblique anamorphosis is not a simple (linear) stretch.

What has trompe l'oeil got to do with it?

Oblique anamorphosis is closely related to an artistic technique called trompe l'oeil (French for "deceiving the eye", pronounced "tromp loy"). Both use perspective constructions to create a "trick" image, but the difference lies in the nature of the trick. For an anamorphosis, the viewer is presented with something that does not make sense when viewed conventionally, and so he or she must seek out the unconventional viewpoint from which the trick is resolved. For trompe l'oeil, the viewer, standing in one particular (and usually conventional) place, is tricked into seeing an invented image as if it were reality. One of the most stunning examples of the technique is the fresco painting on the ceiling of the Church of Saint Ignazio in Rome, created by Andrea Pozzo during 1691-1694. A semi-circular roof is transformed into a fantastic picture of the heavens, in which Saint Ignatius ascends into paradise: 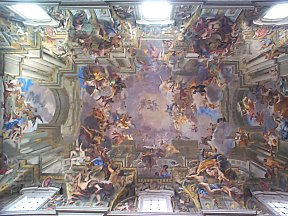 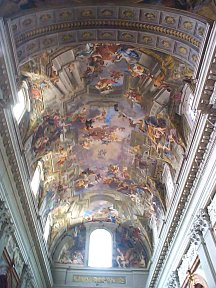 Trompe l'oeil designs only "trick" from their intended viewing point. Seen away from that point (as in the right-hand picture) the imaginary architecture distorts alarmingly. Pozzo himself said: "Since Perspective is but a Counterfeiting of the Truth, the Painter is not obliged to make it appear real when seen from Any part, but from One determinate Point only." (Quoted in M. H. Pirenne, Optics, Painting and Photography, p. 90) In fact, Pozzo's skill in making the painted surface undetectable results in making the distortions more extreme - if the surface could be seen, the brain would be able to compensate for viewing away from the perspective viewpoint (see Michael Kubovy, The Psychology of Perspective and Renaissance Art, 1986).

By playing with the conventions of seeing, both trompe l'oeil and anamorphosis should remind us that what you see has a great deal to do with where you are looking from.

What you see is what you get?

We like to think that seeing is some kind of "direct" perception of reality. But in fact our brains are constantly interpreting and giving structure to the raw visual input from our eyes. Take the everyday situations of seeing an open door, or a building as we walk along the street. Immediately, we give these objects a stable, rectangular form, which amazingly does not appear to change as we move relative to the object, but is that form actually there?... 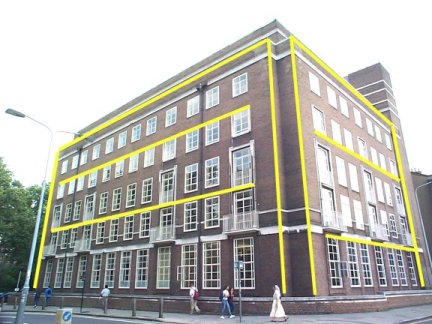 There are some subtle details here (to do with binocular vision, and also that a camera does not "see" like the human eye), but fundamentally the brain is making a choice, that there is a rectangular form which appears distorted because parts of it are further away than other parts. A non-rectangular shape could look the same, but we don't expect to see such shapes. The "Ames Room" illusion brilliantly exposes the kind of expectations that we automatically apply to what we see.

"We prefer an ordered world, regular patterns, familiar forms, and when flaws or distortions occur, provided they are not too gross, our mind's eye tidies them up. We see what we want or expect to see ..."

"... We never see the whole of any solid object at any given moment; even to see the whole surface of so simple an object as a sphere, six successive viewpoints are needed ... But we accept at a single glance that it is a sphere: we complete it on the assumption that it is a consistent shape, and the simplest possible one. In fact it might be any one of countless forms that are only partly spherical. There is a fountain court at Granada where visitors are told the story of a Moorish Caliph about to appoint a Grand Vizier. He invited the candidates to identify an object lying or floating in shallow water. All but one promptly said it to be an orange. One picked it up, and identified it as half an orange; he got the job." (Lawrence Wright, Perspective in Perspective, pages 27, 24).

This web site is developed by Phillip Kent